‘Most renewable energy companies’ linked with claims of abuses in mines

Corporate watchdog urges clean-up of supply chains as analysis finds weak regulation and enforcement has led to lack of scrutiny. 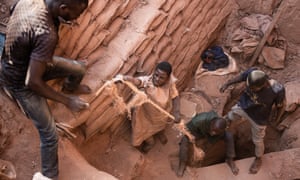 Cobalt mining in the Democratic Republic of the Congo. Demand for minerals could rise by as much as 900% by 2050, according to World Bank estimates. Photograph: Sebastian Meyer/Corbis via Getty Images

Most of the world’s top companies extracting key minerals for electric vehicles, solar panels and wind turbines have been linked with human rights abuses in their mines, research has found.

Analysis published by the Business & Human Rights Resource Centre (BHRRC), an international corporate watchdog, revealed that 87% of the 23 largest companies mining cobalt, copper, lithium, manganese, nickel and zinc – the six minerals essential to the renewable energy industry – have faced allegations of abuse including land rights infringements, corruption, violence or death over the past 10 years.

As the global economy switches to low-carbon technologies to combat global heating, demand for minerals could rise by as much as 900% by 2050, according to World Bank estimates. In order to prevent further human rights abuses, renewable energy companies urgently need to clean up their supply chains, said BHRRC senior researcher Eniko Horvath.

“As the renewable energy sector finds its feet, it is crucial that it introduces rigorous human rights protections throughout its supply chains,” said Horvath. “This is essential in order to prevent abuse, retain the social licence to operate, and avoid costly delays due to local opposition.”

The watchdog found no correlation between the existence of a company’s human rights policy and whether such a policy prevented it from receiving allegations of abuses, indicating that the current company policies were either insufficient or not adequately enforced in their supply chains. For example, the top five lithium companies have all had human rights abuse allegations made against them, yet only one company had a publicly available policy on human rights, BHRRC found.

BHRRC’s deputy director, Marti Flacks, said that in many of the countries where minerals are mined, weak regulation, poor enforcement and lack of rule of law have meant many companies have escaped scrutiny.

“Renewable companies need to do their due diligence no matter where they’re working. This is not just about one country or one mineral,” said Flacks.

“The companies that develop these six minerals are by and large more medium-sized mining companies, which don’t have as extensive due diligence or human rights policies in place, nor have they faced the same kind of exposure the larger companies have had, which means they haven’t been subject to the same kind of scrutiny.

“But the renewable energy sector is growing really fast and it has a chance to change the standards and practices of the industry. This is a unique chance to send the sector a message to say: ‘You have to do your due diligence, you have to have a human rights policy and you have to be engaging in multi-stakeholder initiatives, doing site visits, and most importantly talking to communities and NGOs to get accurate reporting of what’s going on.’”

The highest number of allegations of human rights abuses took place in cobalt mines in the Democratic Republic of the Congo, the report found, where 31 allegations were recorded between 2007 and 2019. Cobalt is a key component in electric car batteries, with more than 70% of the world’s cobalt mined in DRC. Tens of thousands of artisanal miners – a large number of whom are believed to be children – face dangerous working conditions, relocations and toxic pollution, reports have found.

The BHRRC has launched a tracker tool to allow investors, businesses and civil society groups to trace the allegations made against companies mining the six key minerals for the electric car, solar and wind sectors.