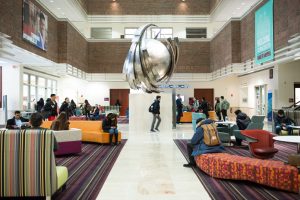 Among BU’s professional schools, the School of Medicine jumped 8 notches, to 26th, for the quality of its primary care education. MED advanced one notch, to 29th, in the magazine’s medical research category. (U.S. News rates medical schools in various categories.) The magazine reviewed a total of 124 medical schools nationwide.

“We are delighted with the rankings this year,” says Karen Antman, dean of MED and provost of the Medical Campus. She says that U.S. News changed the methodology in calculating this year’s research ratings: for the first time, it included as one metric all of a school’s research funding. Past rankings considered only funding from the National Institutes of Health.

“We did well,” Antman says, given this expanded metric.

Other BU schools faring well are the Questrom School of Business, which rose 2 notches, to 42nd in the country, out of 127 peers ranked by the magazine (its part-time MBA program jumped 10 spots, to 32nd); the School of Education (34th of 267, up 2 notches from last year); the School of Social Work (10th of 251, up 2 notches from 2016, the last time the magazine calculated social work school rankings; this is the first time SSW has made the top 10); and the College of Engineering (35th of 199, a drop of one notch).

This resource is from BU Today